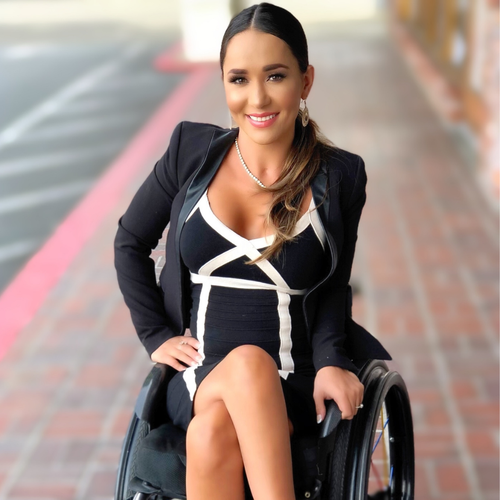 Talks covered by this speaker

See Beyond - How to embrace our differences

Have you got yours yet?

Our All-Access Passes are a must if you want to get the most out of this event.

Tamara Mena is a bilingual motivational speaker, actress, host, model, content creator, ambassador, survivor and eternal optimist. Tamara was born and raised in Leon, Mexico and immigrated to the U.S. at the age of 13. At the age of 19, she suffered a horrific car accident that left Tamara paralyzed from the mid-chest down and, unfortunately, killed her boyfriend. On a cold October night, they were headed to Rosarito beach. Their plans were to go dancing and they did not want to drink and drive, so they decided to grab a taxi in Tijuana, Mexico. They were almost to their destination, when they randomly struck a horse that was standing in the middle of the road. From this impact, Tamara became paralyzed, and unfortunately, her boyfriend and taxi driver were instantly killed. It was a miracle Tamara survived this accident. From surviving a near death experience, Tamara chose to dedicate her life to share her message of hope, and above all, motivate people to believe in themselves.

Despite the great tragedy she endured, she never lost sight of her dreams and goals; Tamara retook her studies, attended California State University Stanislaus, where she majored in Communication Studies, received numerous academic awards, and despite several hospitalizations, graduated with highest honors, summa cum laude. Additionally, she broke a huge barrier at CSU Stanislaus by being the first commencement speaker in a wheelchair to deliver an inspirational speech in front of 10,000 people and received an outstanding standing ovation, one she has never forgotten! She has been invited as a motivational speaker by important international conferences, such as “Ciudad de las Ideas” “Creative Inspirational Forum” as one of the top 15 most inspirational people in the world, as well as others.

Tamara has been on numerous TV shows, English and Spanish speaking including Sábado Gigante, Aquíy Ahora, Qué Noche, The Doctors, Inside Edition, American Latino, El Hormiguero and others. She impacted millions of people with her participation in the famous beauty pageant and reality TV show, Nuestra Belleza Latina, by being the first woman in a wheelchair to make it in the competition.

She’s modeled on runways for Milan Fashion Week & New York Fashion Week and has been featured in various magazines including Cosmopolitan Latinas, awarded as a “Fun Fearless Latina.” She was awarded as one of the “Most Inspirational Latinas of 2016” by Alegria Magazine. In December 2019 she was on the cover of the magazine “Alegria” awarded as one of 10 Latinas of impact. Tamara’s powerful story has been covered in Fast Company, Huffington Post, Daily Mail and many others.

Tamara has hosted for LATV’s “American Latino” TV show. She is the host and co-producer of “Beauty on Wheels” and “See Beyond TV.” She is the first host in a wheelchair to present the Easterseals disability Film Challenge awards ceremony at Sony Pictures entertainment.

She has been featured as an actress in the TV show Speechless. She has produced, co-written, and acted in several short films that are Disability inclusive, such as “Rivals or Friends” and “Dear Younger Me.” She was nominated “Best Actress” by the Easterseals Disability Film Challenge in 2018. She was recently part of the cast of the short film “Connections” which won numerous awards at the “Los Angeles 48 hour film project,” including the greatest honor, winning “best film.” Her rwork in the short film “La Reina” in which she is the lead actress surprised many people for the unexpected twist and strength and power of this character. She appeared in the TV show “LA’s finest” as a guest star in season two finale.

Tamara was selected in 2019 as one of the few actors with disabilities to perform at the Screenwriters Guild of America Disability Scene night, and Tamara performed a few scenes with well known actress, Jamie Lynn Sigler; of which several people called “the best of the night.” In 2020 she was selected to participate in the first CBS pipeline challenge as a director and was recently selected as an actress to be part of the CBS 2021 showcase.

Tamara has appeared in several commercials for brands such as Apple, Kay Jeweler’s, Disney, Electrify America, and ServiceNow. She has also worked as an ambassador and social media influencer with brands such as Redbull, Tommy Hilfiger, Disney, and others.

Tamara was part of ipsy’s first body positive campaign and she was the only person in a wheelchair. She is the first talent with a disability that Ipsy worked with, promoting more diversity and inclusion. Tamara created the “Embrace You Project” to empower women of all walks of life, as women empowerment and promoting body positivity is important to her.

Tamara’s courageous spirit continues to stay up, even with all the obstacles she’s had to face and overcome, such as surviving two car accidents. She is a content creator determined to spread a message of hope, strength, and faith, through all her social media platforms, hoping to encourage everyone to fight for their dreams and goals, believe in themselves, and always celebrate life!

Your logo could go here!

If you'd like to get your brand in front of attendees following the categories this speaker is talking about (on this page, via email and during each talk) contact us.
We use cookies This website (and some of its third-party tools) use cookies. These are important as they allow us to deliver an exceptional experience whilst browsing the site.